Minnesota Vikings rookie wide receiver Justin Jefferson was aware of the expectations placed upon him after the Vikings selected Jefferson with the first-round pick acquired in the Buffalo Bills-Stefon Diggs trade.

“A lot of people felt that I was coming in to replace Stefon Diggs. They kind of made it seem like we was enemies,” Jefferson said in a recent press conference, adding that the two wide receivers congratulated each other on their successful seasons.

Diggs & Jefferson Share Record-Breaking Seasons
Diggs currently leads the league in receptions (120) and receiving yards (1,459) — both franchise records — as a foundational offensive weapon to the Bills, who have claimed their first AFC title in 25 years.

The Vikings tempered the expectations on Jefferson, but after earning his first career start in Week 3, Jefferson has pieced together one of the most impressive seasons by a rookie wide receiver in league history, securing 79 receptions for 1,267 and seven touchdowns.

Jefferson’s performance this season hasn’t gone lost on Diggs, who recently went public in backing Jefferson’s bid for Offensive Rookie of the Year. 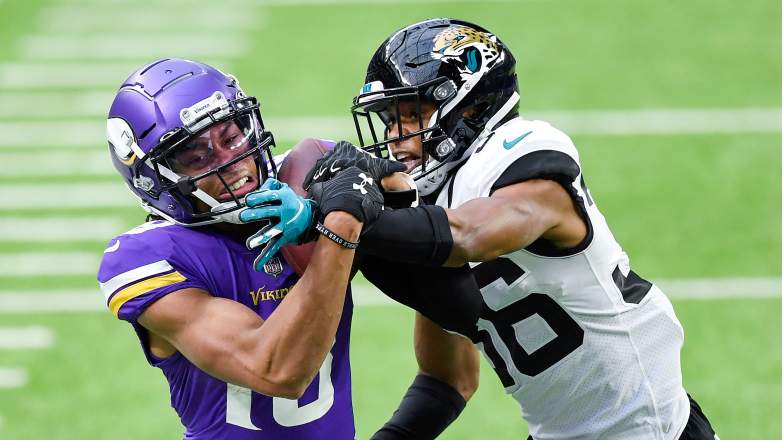 The inevitable comparison between the two wide receivers will likely never end as the fallout between Minnesota and Diggs continues to be nebulous of whether Diggs was right — that the team would have been better off by throwing the ball more.

Coach Mike Zimmer has said “Diggs didn’t have to go,” meanwhile, Diggs has championed the story that he had to force his way out of a bad situation after he saw his career and the team’s success going a different direction by embracing a more run-heavy approach.

Adam Theilen and Jefferson both proved that there is still plenty of production for wide receivers in Minnesota’s offense, however, the team’s decision-making at times was questionable this season.

ESPN’s Courtney Cronin reported that no other team ran the ball more on second down (47.6%) than the Vikings, who also had the fifth-highest designed run percentage. Often sticking to the game script and running the ball while behind in the second half resulted in Minnesota running the clock out on itself too many times this season.

The Vikings likely not willing to drastically shift the offensive philosophy midseason, however, moving forward, the Vikings should consider putting the ball in several other playmakers’ hands as Jefferson and Irv Smith Jr. have proven to be emergent stars to join Thielen in the passing game.

Regardless of future decisions, Jefferson has maintained that he’s content with his role in the offense that has enjoyed its most productive season since 2009 without the Minneapolis Miracle star.

“I feel it will always be that type of conversation with us just because I’m replacing him and he went to a team where he wanted the ball a lot,” Jefferson said. “So he’s getting exactly what he wanted. He’s doing things for his team and I’m doing things for mine. We are each our own player. We don’t try to act like one another.”

Joe Haden reveals he was in scary car accident (PIC)

Cowboys reportedly pushing back on rumors of David Njoku interest

STEPHEN A. SMITH DANCES TO ‘WE DEM BOYZ’ AFTER THE COWBOYS GET BLOWN OUT BY WASHINGTON (VIDEO)

John Elway announcement could be bad news for Drew Lock