The Kansas City Chiefs tight end and his girlfriend Kayla Nicole have reportedly broken up, according to Dreddsworld.

“Reports have it that it was Kayla who dumped Travis.”

“Reports has it that Kayla ended things with Travis, but the NFL star is looking to reconcile with her.”

Kayla Nicole, who has been an on-camera host for different networks and media outlets including “NBA, BET, Global Grind, HotNewHipHop and more, had been with Kelce since 2017. Those days appear to be over after social media users noticed that she not only un-followed Kelce on Instagram, but she deleted every photo she had of him on her page. 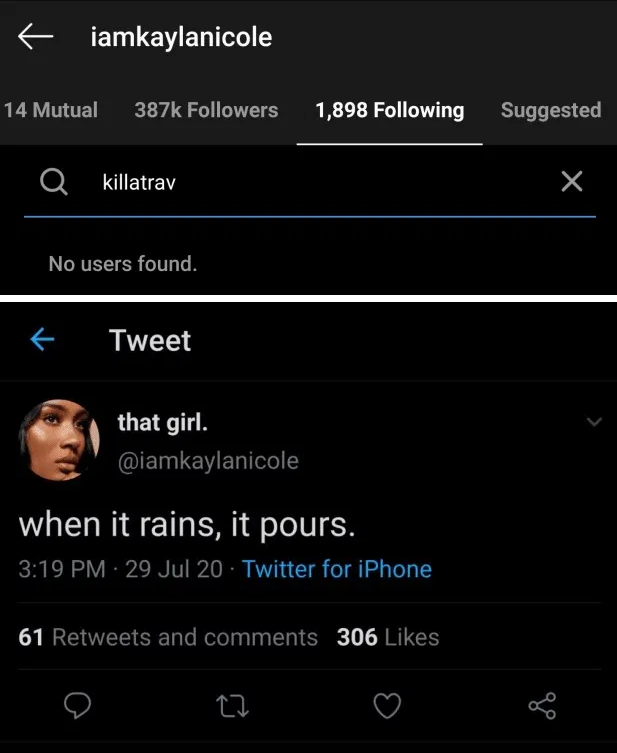 Kelce has not deleted her off of his page as of yet.

She’s the rock to my roll, the passion to my fruit, even the peanut butter to my JELLYTIME… she’s my errrrthang! Love you lil baby, some people take this IG thing a little too serious.

Speculations surrounding the breakup is of Travis’s last year’s cheating incident where he was caught with an unknown blonde chick.

Kayla Nicole addressed the cheating rumors back then.

Not to mention, she is also looking for a realtor as he stated on Twitter:

Social media was hurt by the alleged news:

Travis kelce and Kayla broke up?

Not Travis kelce and Kayla breaking up….. Not him cheating on her

Travis Kelce and Kayla really broke up? There is no hope 😭

why am i crying over travis kelce and kayla nicole pic.twitter.com/hujYJx1CdX

This is just tragic if at all true.

let’s not pretend my caption matters.

happiness, you could model it.

JON GRUDEN BEING ACCUSED OF ‘BLATANT TAMPERING’ WITH RICHARD SHERMAN