Chiefs Had ‘Mutual Interest’ in Signing Ex-MVP Running Back: Report

Following the release of RB DeAndre Washington on Saturday, Kansas City Chiefs’ running backs head into their Thursday night opener against the Houston Texans with zero NFL starts among the group. While 2020 first-round pick Clyde Edwards-Helaire will immediately step into the starting role, the defending Super Bowl champions were reportedly exploring the possibility of a signing a high-profile free agent in recent days.

According to ESPN senior NFL reporter Jeremy Fowler, the Chiefs showed interest in four-time All-Pro and 2012 MVP Adrian Peterson, who was cut by the Washington Football Team on Friday.

Chiefs showed some level of interest in Adrian Peterson this week – OC Eric Bieniemy was his long-time running backs coach in Minnesota — but the Thursday night game was too tough a turnaround to seriously consider.

This is an accurate report. There was indeed mutual interest between the Chiefs and Adrian Peterson, per source familiar with the situation.

Not only was Thursday night game an obstacle, but also COVID testing protocols of two straight days. Because of that, no consideration. https://t.co/5KIRdv3Gui

Instead, Peterson elected to sign a one-year, $1.05 million deal with the Detroit Lions on Sunday morning. The 35-year-old veteran will get “an opportunity to play” and be reunited with Darrell Bevell, his former offensive coordinator in Minnesota.

If Kansas City’s interest in Peterson is any indication, the front office may not be finished revamping the backfield behind Patrick Mahomes. 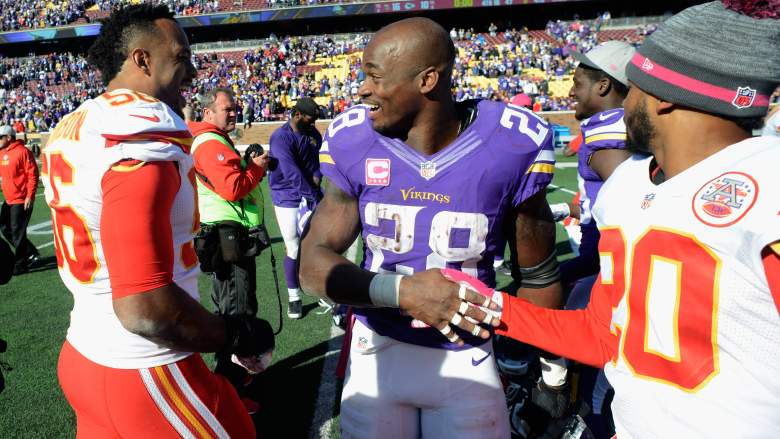 Baker Mayfield: People want us to lose because the hype is so real

Ex-Raider reveals how stunned team was about Amari Cooper trade

The One Contract Holding Back the Kansas City Chiefs