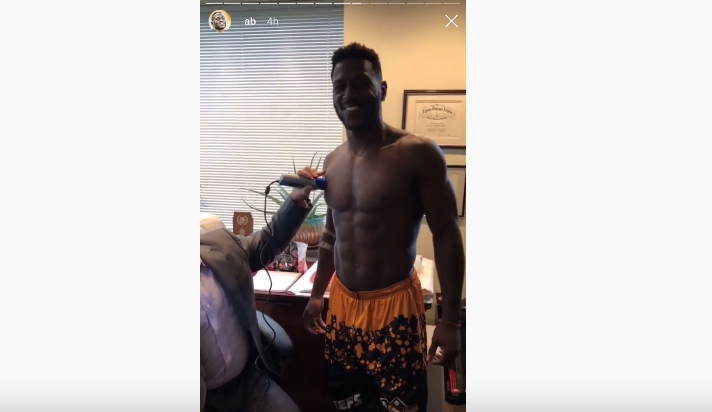 On Monday, Sports Illustrated dropped a lengthy piece on anybody who has had a terrible encounter with Antonio Brown, which is on the heels of him being sued by a former trainer who stated he sexually assaulted her on 3 different occasions in 2017 and 2018.

In that piece was Brown’s former doctor who claimed the New England Patriots star repeatedly farted in his face and laughed about it during a consultation where he showed up three hours late. He also claims the receiver still owes him thousands in unpaid fees.

“Dr. Victor Prisk said he was wary of signing the then-Pittsburgh Steeler because he had a reputation for being “flighty” and not paying his bills, but agreed to take him on as a client anyway, Sports Illustrated said Monday.

One of Brown’s acolytes took video of the noxious meeting in August 2018, obtained by TMZ, in which the footballer can be heard farting and laughing about it as Prisk tests his body fat.

“It seemed just childish to me,” Prisk told Sports Illustrated. “I’m a doctor and this man is farting in my face.”

In the video, Brown jokes, “I had a lot of fiber, bro,” to one friend laughing off-camera.”

Prisk, who is a former bodybuilder & gymnast, filed a suit against Brown earlier this month claiming he owes him $11,500 in unpaid fees.

“He tells you he’s going to make it totally worth your while,” Prisk said, claiming the footballer wanted to go into business with him but “demurred” every time the doctor mentioned his agreed-upon $500 hourly rate.

Michael Irvin: Cowboys should pay Dak Prescott “back pay” for his years being underpaid

Jets could trade Le’Veon Bell at deadline if they’re out of contention?